You Don't Want Original Content - You Just Think You Do

I hear it all the time. Hell, I say it all the time: "Why can't Hollywood make anything original any more?" We're inundated with a steady stream of sequels, remakes, reboots, reimaginings, and adaptations of material from other media (comics, novels, magazine articles, 80's TV shows). In fact a website titled "Short of the Week" famously looked at Hollywood's trend towards regurgitating the familiar, and spawned this infographic which went viral:

The infographic and its accompanying article were meant as a rallying cry to filmmakers and audiences alike, to stop regurgitating the same-old, same-old and to stop lapping it up like mother's milk. Filmmakers and film lovers took up the banner and cried out "Where are the new voices? The new visions? Give us original content! We demand it!"

Only thing is, you didn't mean it. Oh, your intentions were good. In your heart you really want those original visions. You want to be re-inspired by original movies the way you were when you were a kid. You want that thrill of discovery.

Only, you don't. Not really. There's so much content out there competing for your attention that to invest any sort of time, money, or energy into watching something requires you to know something about it beforehand. Maybe you read the graphic novel. Or played the videogame. Or at the very least you know who's in it. It needs to have a "brand." It needs to be familiar.

Let's take a look at two films that we've posted on our YouTube channel, "Fallout" and "Red Sand." 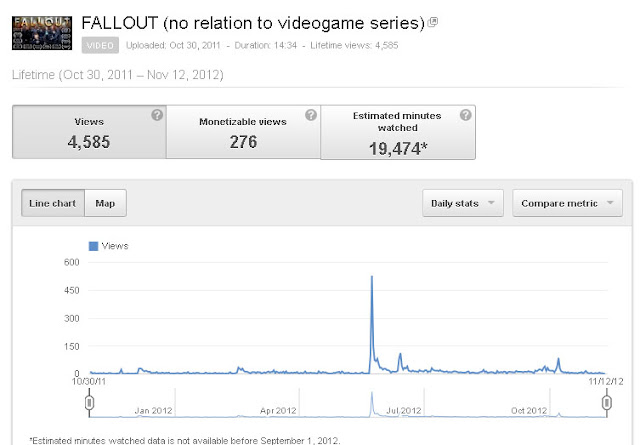 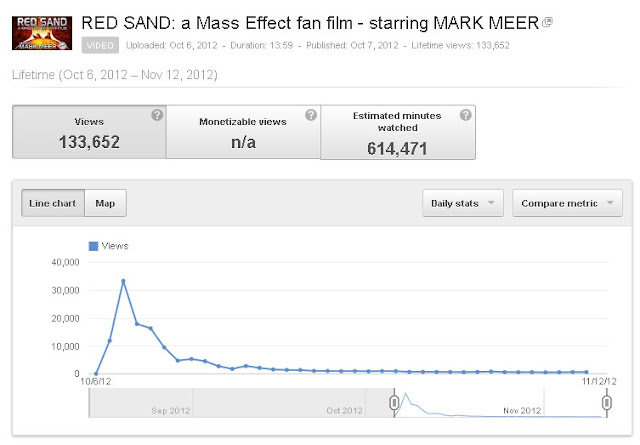 So what's going on here? The power of the known property, that's what. "Red Sand" is based on the immensely popular Mass Effect videogame franchise. "Fallout," while sharing a title with another videogame property, is an original vision not otherwise tied to any known property. This alone accounts for the vast difference in the view counts of these two films. In fact a closer look at the stats for "Fallout" serves to prove my point further. There are several spikes in the views graph for "Fallout," the most noticeable of which falls on May 24, 2012 - the day after the release of our first trailer for "Red Sand," which has an advertisement for "Fallout" tagged on the end. 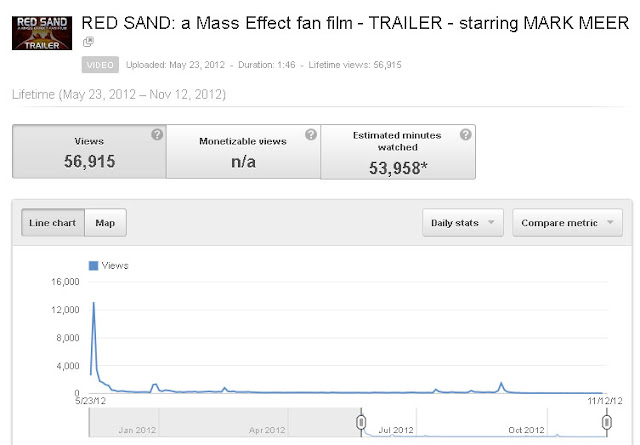 By comparison, "Fallout"'s own trailer has roughly 3,500 views and has, according to YouTube's stats, prompted just 37 of those viewers to watch the actual "Fallout" film (just over 1%). 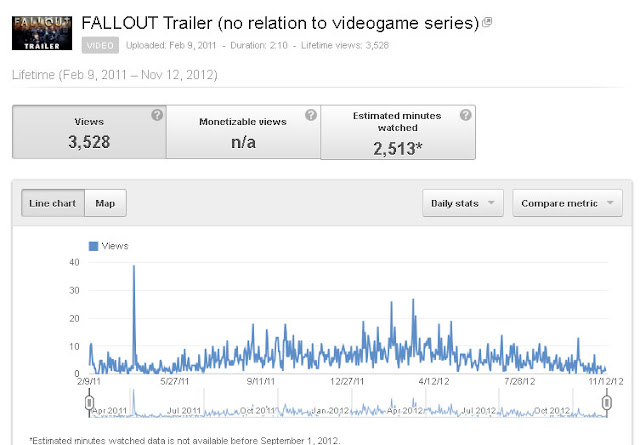 Even this graph serves to prove my greater point - that the average viewer will only watch something if it's somehow been granted the appearance of a "known property." In this case, that big spike on April 5, 2011 is just days after "Fallout" won Best Arizona Short at the 2011 Phoenix Film Festival - an assertion of quality by a known entity which says to the viewer "this is worth your time."

So what's the solution for a filmmaker trying to get more eyeballs on his or her films? For a long time that solution seemed to be "name actors." Get a recognizable name and face in your film, and you've got a hit on your hands. Well, yes and no. Casting Mark Meer in "Red Sand" certainly ensured a fair amount of viewership (he is, after all, the voice of Commander Shepard in the Mass Effect games), though one would hardly call him a "household name." Yet in this case he seems to have much more marquee value than "bigger" names like Bill Engvall and Danny Trejo, the stars of our film "Cowboy Dreams" from 2008.


"Cowboy Dreams" was, like "Fallout," an Official Selection of the Phoenix Film Festival. However its total view count is right around 10,000 lifetime views. 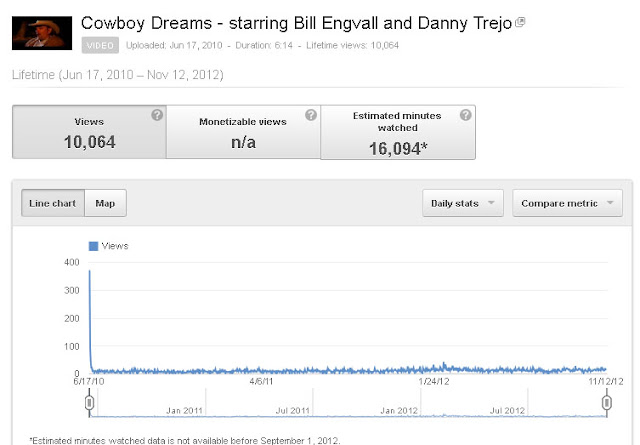 Just by math alone, one could make the argument that name actors can roughly double your audience (10,000 for "Cowboy Dreams" compared to around 5,000 for "Fallout"), but a known property like Mass Effect can multiply your audience by a factor of 20 or more.

And before you dismiss this article as simply focusing on YouTube stats, realize that I am using these stats which I have at my fingertips to illuminate a broader point. One need look no further than this summer's box office to see the evidence of my thesis. Compare the opening weekends of the Alien prequel Prometheus ($51 million) and the original story Looper ($20 million). They're both high-concept sci-fi with all-star casts, and yet their box office takes are inversely proportional to their quality.

In conclusion, before you decry "Hollywood's lack of originality" you really should look at yourself - and the rest of the audience - as the ones lacking originality! It's you, the viewer, who doesn't embrace original visions, new voices, unique stories. It's you, the viewer, who is ensuring a continued diet of the same-old, same-old! So if you're truly tired of the regurgitated pablum Hollywood is feeding you - stop consuming it. Watch something new. Find those hidden gems on Netflix, Hulu, YouTube, Vimeo, etc. Go to a film festival. Check out the arthouse instead of the multiplex this weekend. But for the love of cinema, become part of the solution instead of just complaining about the problem!
Posted by Paul DeNigris at 10:19 AM 1 comment: 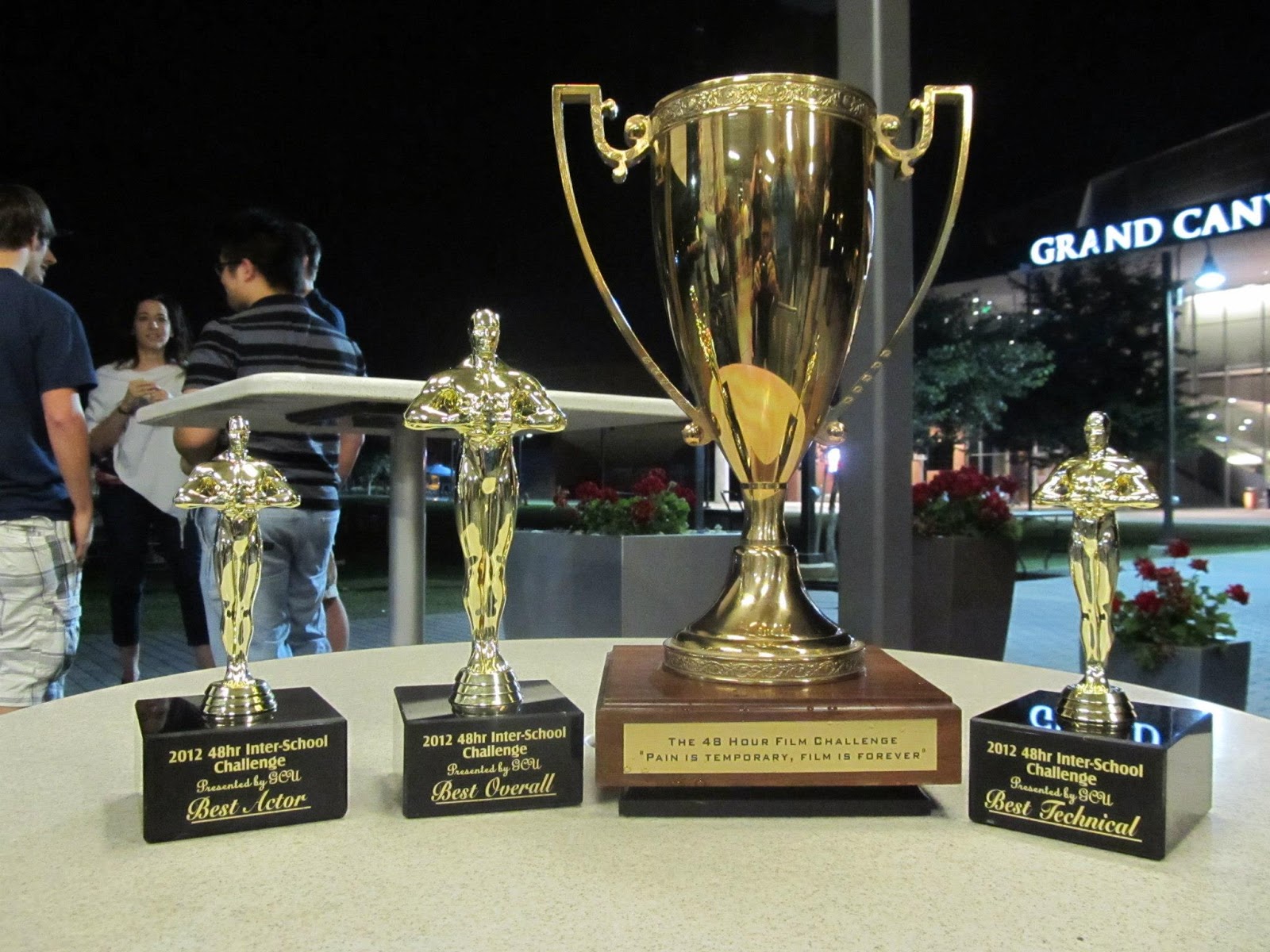 This weekend, two teams of UAT DV students competed in the 5th Semi-Annual Valley-Wide Inter-college 48 Hour Film Challenge, hosted by Grand Canyon University. (This is a recurring event that happens twice a year; GCU hosts in the Fall and we host in the Spring.) 12 teams total competed, representing GCU, UAT, ASU, and both Scottsdale and Glendale Community Colleges.

GCU Professor Gregg Elder assembled a panel of judges from the UAT and GCU faculties, as well as from the local film community. Four awards were given, Best Acting, Best Technical, Best Directing, and Best Overall Film. The Best Overall award included not only an individual trophy for the film, but the custodianship of the newly-minted "Persistence of Vision" Cup which like the Stanley Cup will be housed on the winning team's campus until the next challenge. 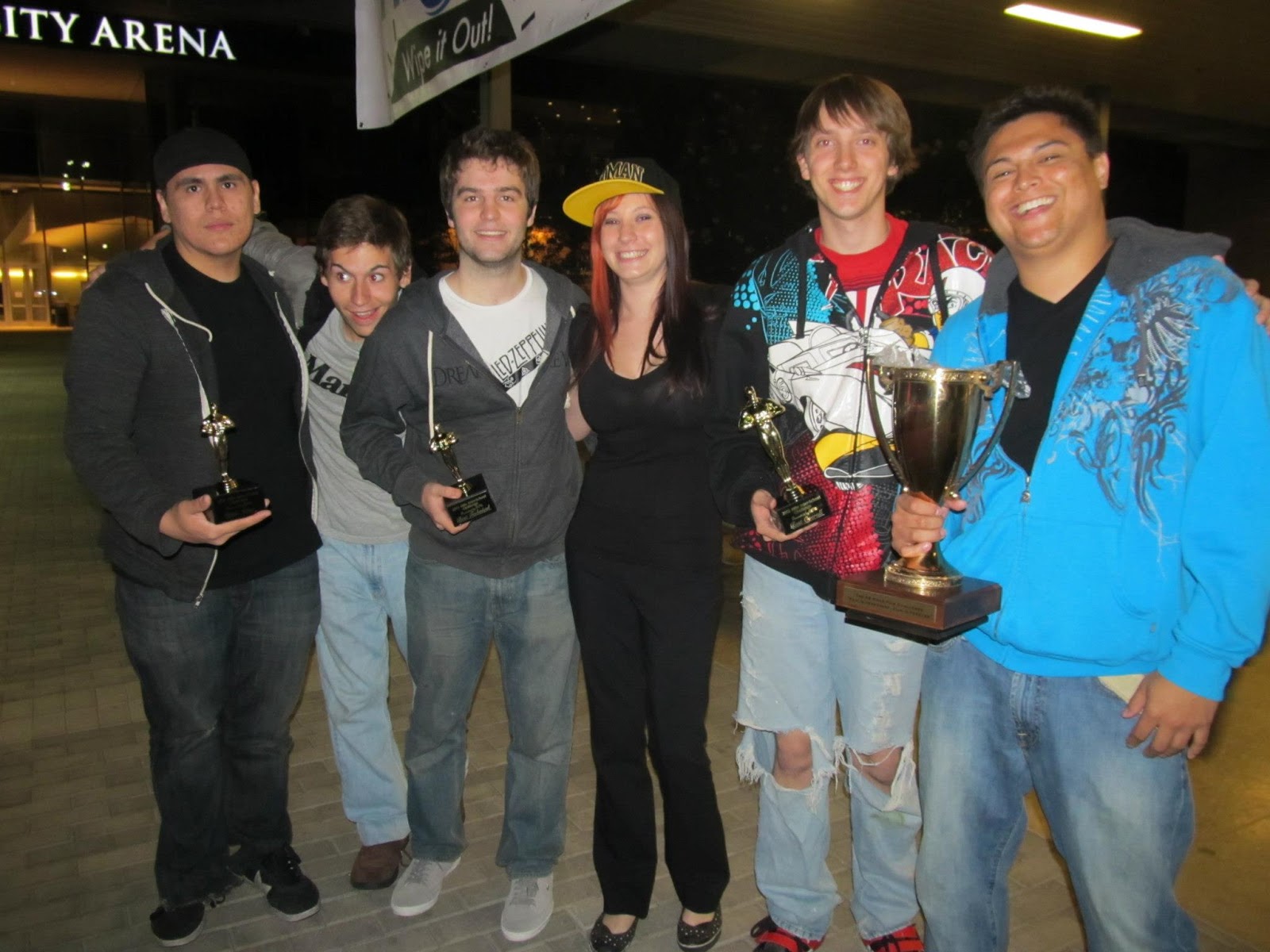 One of the UAT films, "Apart From Your World," won three out of the four awards and took home the POV Cup for Team UAT. The film, a musical exploration of geekdom that was filled with visual effects sequences inspired by Buffy the Vampire Slayer, Superman, Star Wars, and many more, won Best Acting for UAT student Nathan Benson (who also sang), Best Technical, and Best Overall Film.
Posted by Paul DeNigris at 12:04 PM No comments: