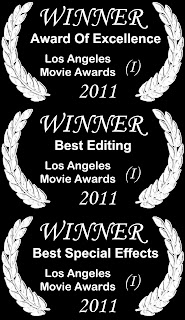 Our sci-fi action thriller "Fallout" continues to be on quite a roll since its win for "Best Arizona Short" at the 2011 Phoenix Film Festival! Since then "Fallout" has been honored with more screenings and more laurels, all of them in Los Angeles:

The film screened as part of the 2011 Los Angeles Film and Script Festival in Santa Monica, where it won an "Honorable Mention" in the Narrative Shorts category.

And "Fallout" is also an Official Selection of the prestigious NewFilmmakers Los Angeles screening series at Sunset Gower Studios coming up in June!

Congratulations to all the students and alumni who worked for so long on this film. Your efforts are appreciated at UAT and beyond! There are still many more festivals we've yet to hear from, so expect more of these sorts of announcements to come!
Posted by Paul DeNigris at 9:27 AM No comments:

Two of our entries in past IFP/Phoenix 48-Hour Film Challenges have been selected for Phoenix Comicon ("The signature pop-culture event of the southwest"). "Extraordinary Colleagues" (recent winner of Best Directing and Best Editing in the 2011 IFP/Phoenix "Beat the Clock" Finals) and "Somewhere (dot, dot, dot)" will be screened as part of the "IFP Film Challenge Block" on Saturday, May 28th at 3:00 pm.

Phoenix Comicon will be held at the Phoenix Convention Center May 26th thru 29th. Info about tickets can be found here.
Posted by Paul DeNigris at 8:01 PM 1 comment: 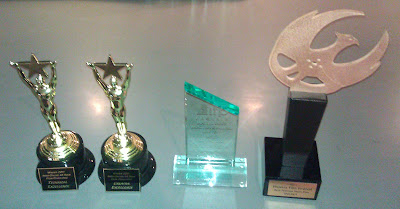 Spring 2011 semester ended up being one of the busiest on record here in the UAT Digital Video Program. Some of our highlights these last couple of months:

Posted by Paul DeNigris at 7:58 PM No comments: