Courtesy of student Kenny Rayl:
Thanks Kenny!
Posted by Paul DeNigris at 1:40 PM No comments: 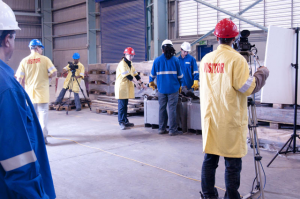 2004 grad William McLeod's company Creative Design has produced a comedic safety training video for a huge aluminum smelting project in Qatar, where his company is based.


“We approached the problem of communicating to a large and diverse audience, many of whom are non-native English speakers, by suggesting a comedy script that identifies the very serious hazards, makes them memorable by making people laugh, and then capping each major section of the film with a formal review of the takeaways to drive home the message”, remarks William R. McLeod, Head of Operations for Creative Design.

Read the rest of the article here on the Qatar Projects website.
Posted by Paul DeNigris at 8:15 AM No comments: 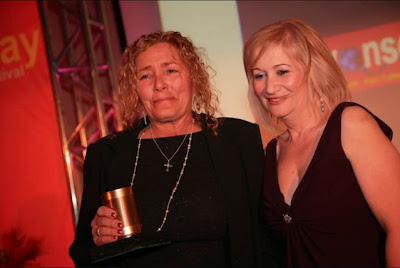 UAT alum Jenny Pond (pictured, left) has taken home the award for "Best Environment & Ecology Film - International" for her documentary Poison Wind at the 2010 Swansea Bay Film Festival in Wales, UK. Swansea Bay is one of many stops on the festival circuit for this film, which premiered at the 2008 San Antonio CineFestival and has been screened at environmental and indigenous peoples events in our nation's capital and around the world.

"POISON WIND tells the story of a corrupt government, unconscionable greed and a policy of destruction aimed at the Aboriginal Homelands of Indigenous People and former uranium miners from the 1940's until today. It is a documentary which focuses on the lives being destroyed by the deadly legacy of uranium mining and effects of radiation...as a government’s cruel secret is carried on the face of the wind."

This is a project which has been well-supported by the UAT community and has involved the participation of faculty, students, and alumni alike. UAT Digital Video is proud to share some small part Jenny's success - but without her drive and enthusiasm for the project, none of it would have been possible. Congratulations, Jenny! We are all so proud of you and your film!
Posted by Paul DeNigris at 8:17 AM No comments:

Posted by Paul DeNigris at 11:05 AM No comments: