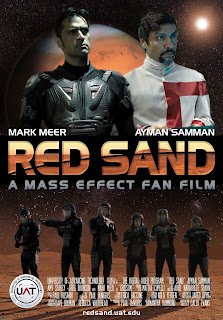 Professor Paul DeNigris and student Caleb Evans will be speaking on a panel at this weekend's PAX Prime convention in Seattle, Washington. The panel is titled "Virtual Reality: bringing video games to life" and will feature a number of film professionals discussing their work on videogame-inspired projects such as our own "Red Sand: A Mass Effect Fan Film."

In 2004, the folks at Penny Arcade decided they wanted a show exclusively for gaming. Sure, comics, anime, and other nerd hobbies were cool, and those activities all had their own shows… so what about games? From that idea spawned a small 4,500 person event in Bellevue, Washington, focused on the culture and community that is gaming.

Since then, the show hasn’t looked back. Doubling in size each year until venue capacities were reached, in 2010 the show expanded into Boston for PAX East, drawing tens of thousands of attendees in the inaugural year. The shows in Seattle and Boston represent the two largest gaming events in North America!

We'll post pics and video from this event as soon as they become available!

WOW! Another semester done, and this one goes in the record books as one of the busiest and most successful to date for the Digital Video Program.

Two of our films, the family adventure "Flight of the Melvin" and the supernatural thriller "Covet" were selected for Phoenix Comicon.

Two of our videos from TEDxPhoenix 2011 made it to the front page of TED.com and scored over 3000,000 views combined.

The new Digital Video Program "highlights reel" debuted on YouTube and Vimeo, featuring some of the best work by our students from 2005 to the present.

The trailer for our Mass Effect fan film "Red Sand" debuted on YouTube and has racked up over 40,000 views to date. (The previous teaser for the film is at over 110,000 views.) The trailer also brought us significant press coverage by the likes of MSNBC, Kotaku, and more.

The UAT DV crew took a road trip up to Salt Lake City, Utah, to collaborate with the folks at Frogpants Productions to produce the DVD of their "Nerdtacular '12" event.

"Flight of the Melvin" was selected for GenCon Indy (a HUGE gaming convention in Indianapolis) and Dragon*Con (another HUGE convention for games, comics, and genre entertainment in Atlanta).

The videos produced by UAT DV for February's "Geeks' Night Out" event in Tempe were published to YouTube.

"Flight of the Melvin" got a rave review on Arizona film criticism site Apocalypse Later. So did "Parallax."

Our big film festival hit from last year, "Fallout," continued its amazing run by screening at the Fright Night Film Festival in Louisville, KY, where it won "Best CGI" and "Best Action Film."

"Flight of the Melvin" was selected for the Atlanta Horror Film Festival.

Professor DeNigris' film "Parallax" screened at the landmark Grauman's Chinese Theatre in Hollywood as part of the 2012 Hollyshorts Film Festival.
Posted by Paul DeNigris at 1:00 PM No comments:

Wanna see probably the most impressive 27 seconds you'll ever see? Check out "Horizon" by Mickaël Forrett and then watch the breakdown below. One guy did all this work in Photoshop, After Effects, Maya, Mudbox, and Nuke. Unbelievable!

'Clouds' - what happens when a DSLR meets an XBOX Kinect

Here's something I found a while back on Planet5D and never had a chance to post.


Ever since the Kinect emerged on the scene, its depth-sensing camera has fascinated legions of creative coders, but the team behind the RGB+D Toolkit is one of the few attempting to transform the gaming console into a real filmmaking tool. Using a Kinect and a standard DSLR camera, like your Canon 5D, these avant-garde image-makers have created a technique that allows you to map video from the SLR onto the Kinect’s 3D data to generate a true CGI and video hybrid. (From an in-depth article about the project on The Creators Project website.)


The folks behind the RGB+D Toolkit that made these ghostly images possible have been keeping a log of their activities and are making their code available to anyone who wants to play. Maybe a future UATDV project will use this technology? Stay tuned!
Posted by Paul DeNigris at 9:00 AM No comments:

Ken Burns: 'All Storytelling is Manipulation'

Here's a 5-minute interview with a man who has arguably become the master of the long-form documentary, Ken Burns, in which he describes his approach to telling stories.

Originally spotted this one over at nofilmschool. Enjoy!
Posted by Paul DeNigris at 6:53 PM No comments: