Some of you may know that Professor Paul DeNigris, Program Champion for Digital Video at University of Advancing Technology, has taken a sabbatical this Spring semester to get some additional industry experience working in visual effects in Hollywood. Paul is keeping a daily vlog of his experiences in LA, which he calls "Hollywood at 45." Check it out here:

Posted by Paul DeNigris at 11:25 AM No comments: 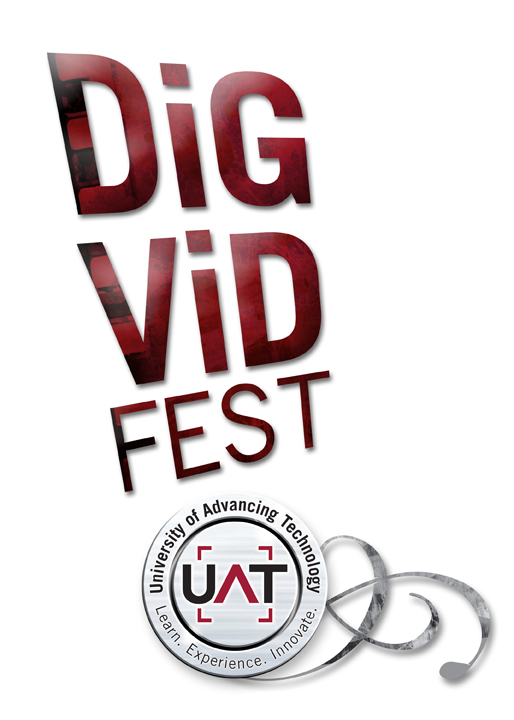 The 2014 edition of the UAT Digital Video Festival will be held on Thursday, November 6th at 7 pm MST in the UAT Campus Theatre.University of Advancing Technology is located at 2625 W. Baseline Road, Tempe AZ 85283For those not local to Arizona, we will also be hosting a Livestream of the Festival.Hope you can join us!
Posted by Paul DeNigris at 7:48 PM No comments: 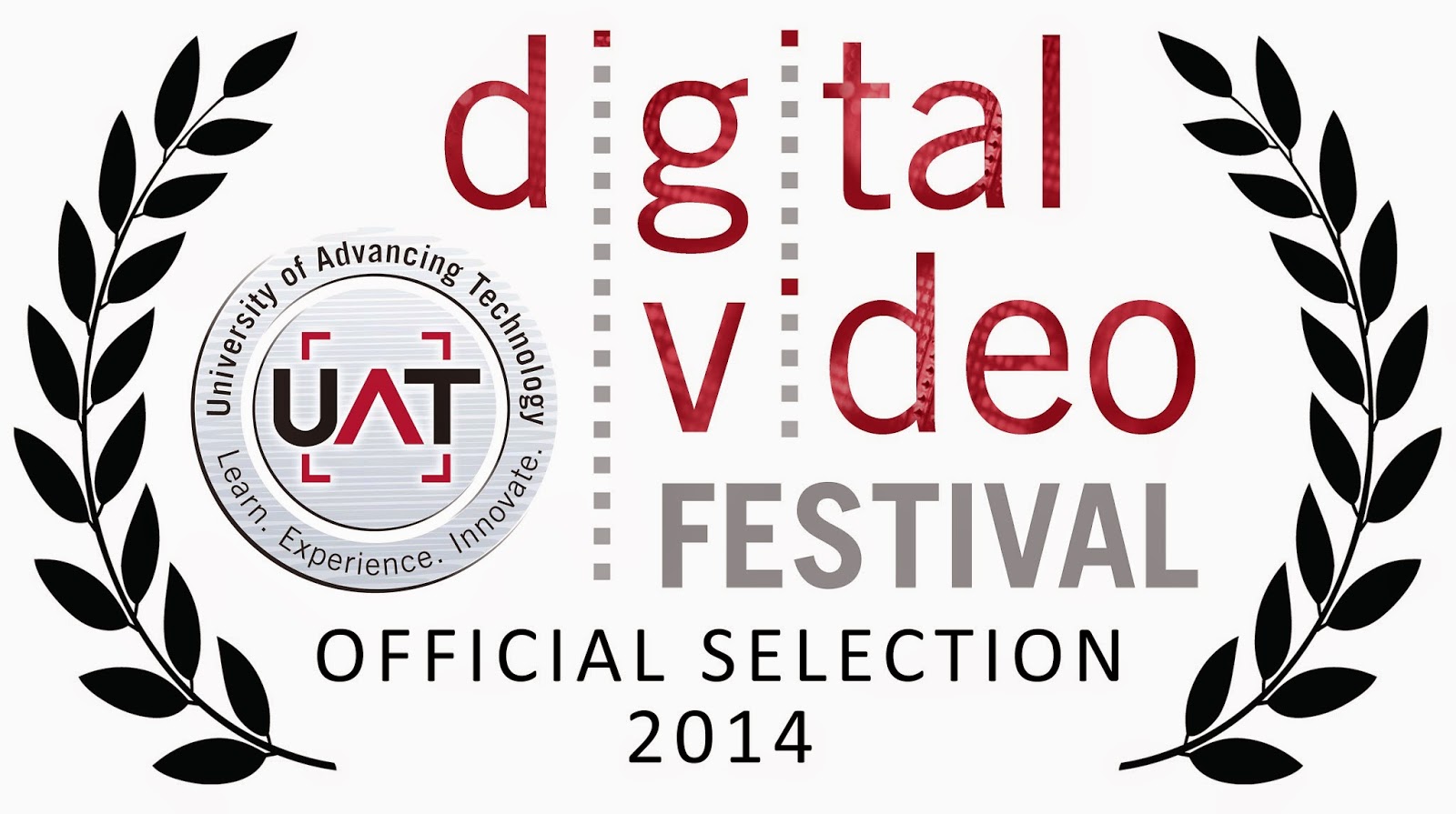 Our 3rd Annual UAT Digital Video Festival will take place on our campus in Tempe, Arizona, during the first week of November, coinciding with our annual "Technology Forum." The screening date is still TBD.

Congratulations to all our selected filmmakers!

Posted by Paul DeNigris at 8:06 PM No comments:

Without a doubt, I can say my time spent at the Four River Film Festival in Karlovac, Croatia, was one the best experiences I have had in my life.  I was extremely fortunate to attend the festival with the support of the University of Advancing Technology.

My newest animated film, The Last Leaf, was screened at the Four River Film Festival. The Last Leaf is about a cute little caterpillar who runs into big trouble trying to get the last delicious leaf on a tall tree. I began the film in November 2013 and finished at the end of January 2014. This was my first go at traditional animation, so I learned a lot during the process. I fell in love with Karlovac as soon as I stepped off the bus. Even though I had just endured fourteen hours of flying and an hour bus ride, I was excited to get started. A festival volunteer picked me up at the bus station and took me to the base for the festival: the Zorin Dom Theater. The dorm building, which would be my home for the next few days, was a five minute walk away. After settling in and claiming my bottom bunk I headed back to Zorin Dom. As a part of a group of young filmmakers, I took part in some introduction activities and then we made our way to the River Kupa for the opening ceremonies. 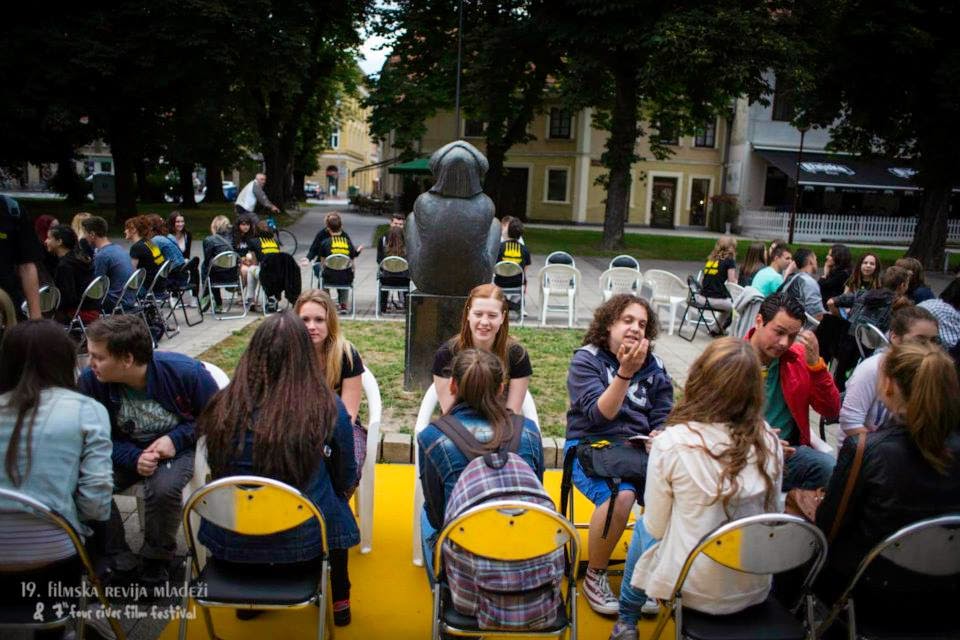 Karlovac is known as “the town on four rivers”. Each night, we would attend an outdoor screening on one of the rivers: Kupa, Dobra, Koranam or Mrežinica. The mosquitos and chilly weather didn't stop us from having a great time while we watched the ceremonies. An introduction to the staff and jury members of the festival was followed by a warm welcome from the mayor of Karlovac. After watching a few films, each of us lit a lantern and sent it into the sky to officially begin the festival. This definitely appropriate for the festival's slogan for 2014: “Why keep your talent in the dark?” 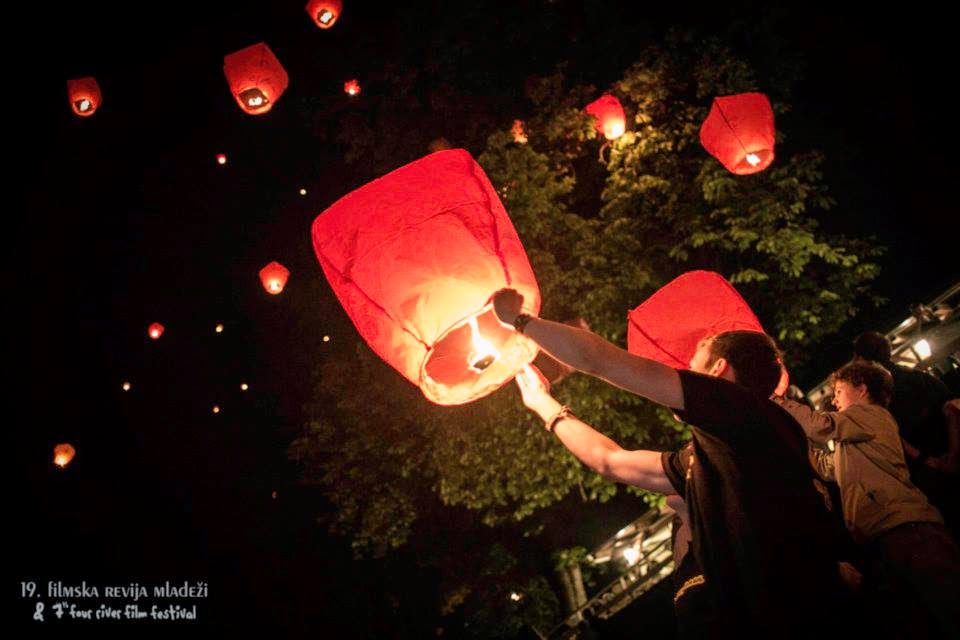 After a sleep we were all ready to tackle the first full day of the festival. Three screenings preceded a night on the River Korana. The filmmakers whose films were screened that day got the chance to strut their stuff on the yellow (not red!) carpet. We watched some more films and then gathered around to cheer on Croatia as they won their FIFA game against Cameroon! 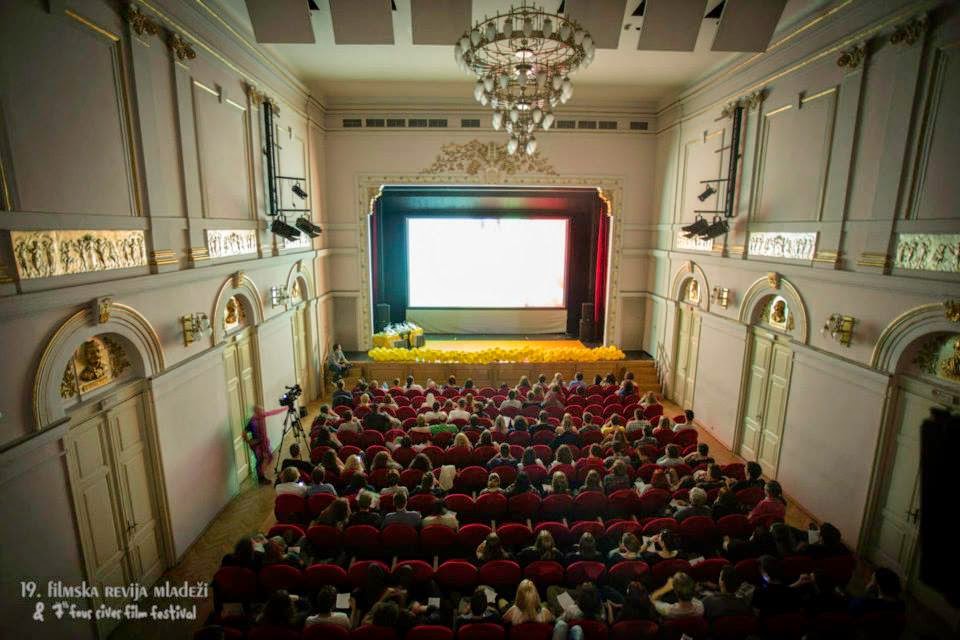 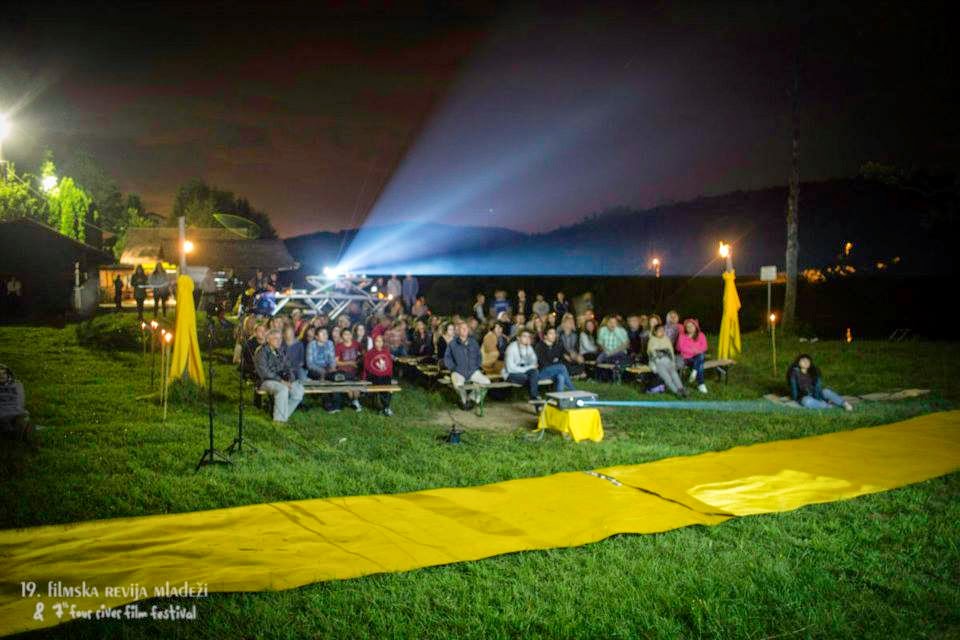 Our next day began much like the one before. A couple of screenings took place at Zorin Dom. Each of us then had the opportunity to choose a workshop or lecture to attend for the afternoon. Being an animation lover, I chose “Documentary Animation”. Lead by two filmmakers from Sweden, a group of us learned how documentaries can be effectively driven with just audio and animated visuals. Our teachers had interviewed citizens of Karlovac the day before, asking the question, “What is a utopia?” We were split into five groups and each group was given a thirty second section of audio. It was our task to create a stop motion to illustrate our clip. The three hours of workshop time sped by and then we had to hop on a bus for the river Dobra. This time we socialized, viewed another screening and even had a small birthday celebration for a couple of the filmmakers! By the time we got back to our dorm room we were all exhausted. It had been quite a long day! 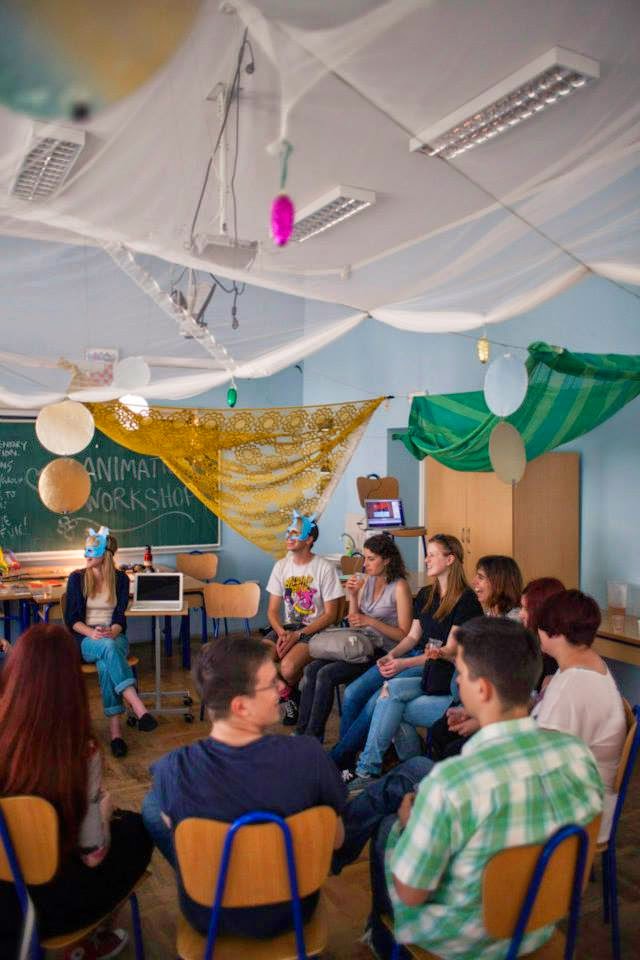 When I woke up the next day I had mixed feelings. I was happy because I was having so much fun with my new friends, sad because my time at the festival was almost over, but also nervous because The Last Leaf would be screening that morning! I am happy to say that the screening went incredibly well. The audience laughed in all the right places and I was given some touching compliments. I also got the chance to speak on stage after the screening and answer a couple of questions about my film. The afternoon continued with us splitting off to continue our workshops from the day before. My group finished our section for the documentary animation. I cannot wait to see the final product! 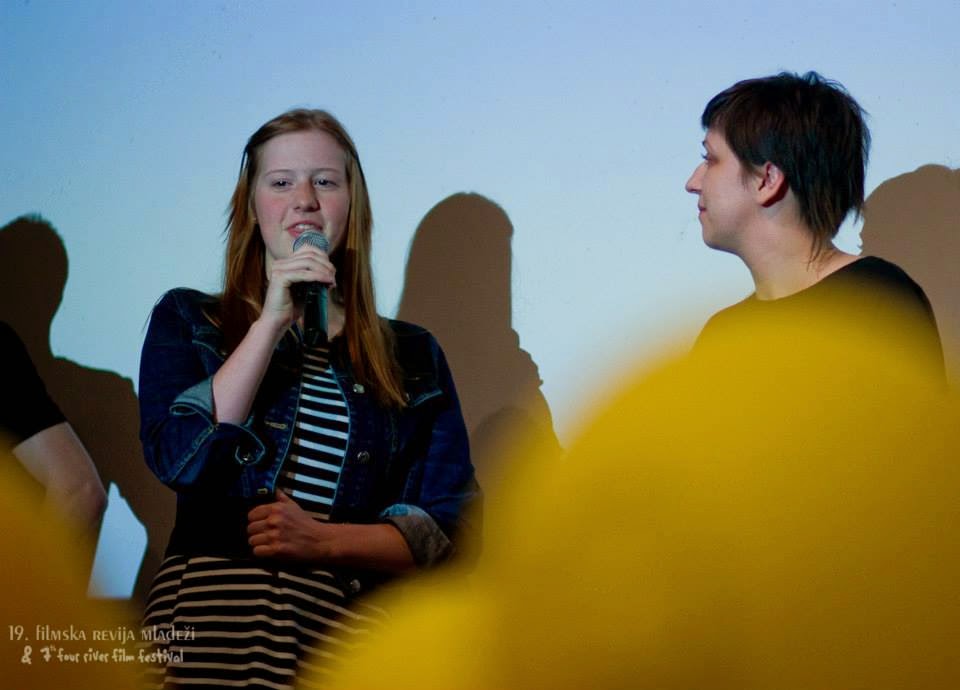 The Closing Ceremony was that night, but due to the rainy weather, we were not able to visit the river Mrežinica. Instead, we sat in the comfy chairs of the Zorin Dom Theater and cheered on our fellow filmmakers who received awards. To end the night, we celebrated and enjoyed each other's company. Just like myself, I think everyone was trying to ignore the fact that our time together was almost at an end.

In the morning I made my way to the Zagreb airport to prepare myself for a 23 hour travel day back to Arizona. This opportunity given to me by the Four River Film Festival and UAT has taught me so much. I learned about myself by traveling to Europe on my own, I learned new techniques from watching my peers' films, but I think the main lesson I learned was about networking. It is an extremely valuable skill for a filmmaker (or any other professional) to acquire. I know now that introducing yourself to as many people as possible, committing to conversation and handing out business cards can go a long way. I now have contacts from over 10 countries with whom I could possibly work in the future. I have already been asked to create animated titles for a fellow filmmaker's upcoming short film!

I am very thankful for the opportunity to attend the Four River Film Festival in Karlovac, Croatia. The trip is definitely something that I will never forget!

Posted by Paul DeNigris at 7:55 PM No comments:

UAT Digital Video student Gwyneth Christoffel has been invited to attend the 7th Four River Film Festival in Karlovac, Croatia, for a screening of her film "The Last Leaf." 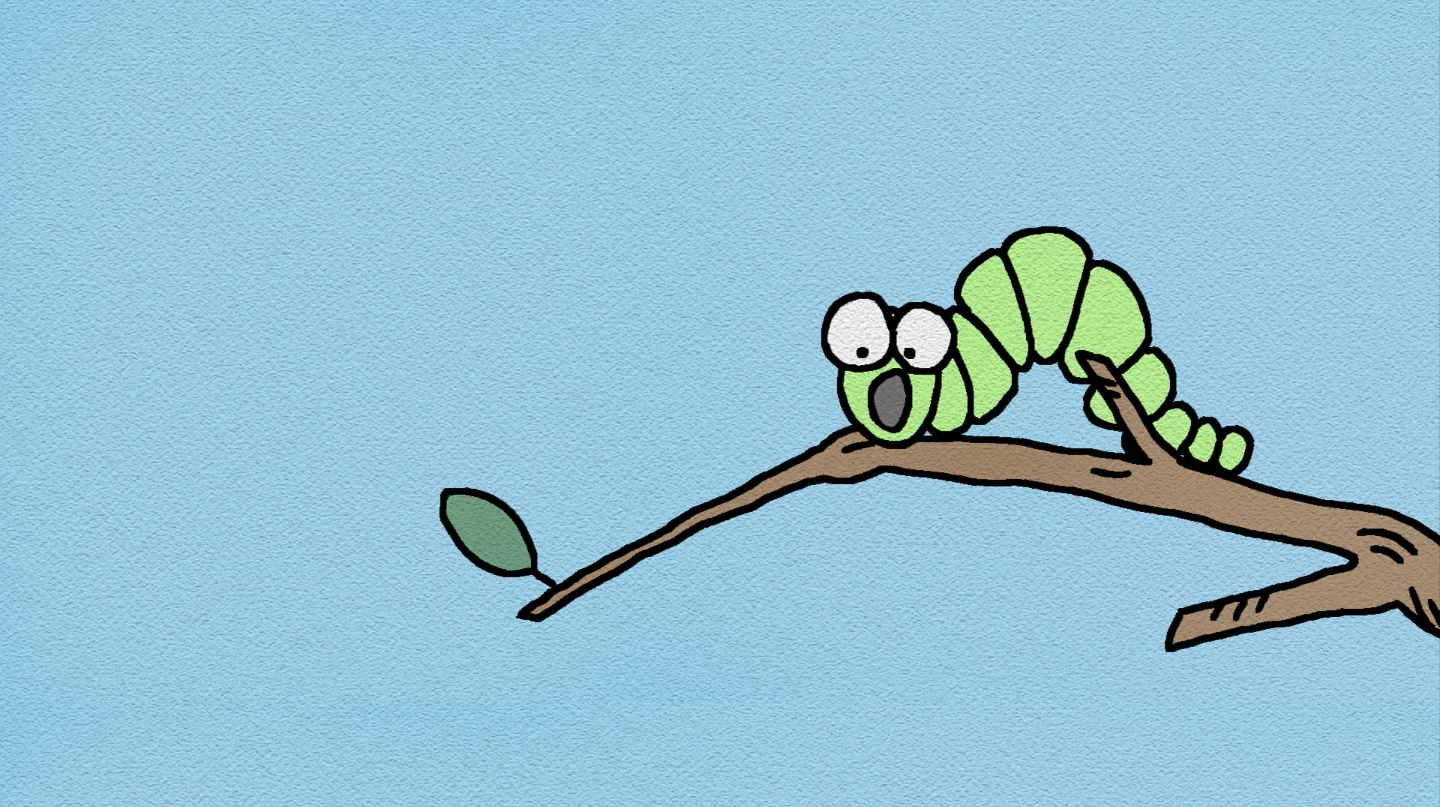 "The Last Leaf"A cute little caterpillar runs into big trouble trying to get to the last delicious leaf on a tall tree in this short animated film by Gwyneth Christoffel.

The objective of "The Last Leaf" was to create a joyful short film to showcase a fun, but gluttonous caterpillar character. With the help of this cute little crawler, the film aims to communicate that one should think twice before giving in to greed. It explores, in a concise and entertaining way, the ideas of conspicuous consumption and conservation.

The 7th Four River Film Festival will take place from June 17-21 in Karlovac, Croatia. Students from more than 30 countries will attend.


"In addition to numerous great films in Karlovac, we offer our participants diverse workshops, performances by young music bands, field trips and lots of networking - all in all, a great time for all young filmmakers!"

Here's their website (http://www.hfs.hr/hfs/festival_777_e_home.asp) and a video about the festival:


Four River Film Festival / Filmska revija mladeži - Totally different from the others from Kinoklub Karlovac / KKK on Vimeo.
Posted by Paul DeNigris at 8:04 PM No comments:

UAT Digital Video is proud to have provided video production support for the last 2 iterations of Ignite Phoenix, a homegrown event where speakers get five minutes to educate and entice the audience with something they are passionate about. Topics run the gamut from politics to food to dinosaurs to cosplay. It's all over the place, and that's what's exciting about Ignite!

And if you missed Ignite Phoenix #15 a few months back, here it is:

Posted by Paul DeNigris at 7:51 AM No comments:

Our 2014 Call for Entries is NOW OPEN! Tell every high school and middle school filmmaker you know!Grand Prize - a FULL TUITION scholarship to the Digital Video Program at the University of Advancing Technology.Our categories: Science Fiction & Fantasy, Fan Films, Science & Technology, Animation, Visual Effects, Innovator (for non-students) and Students & Alumni (for UAT folks not eligible for the Grand Prize).
Deadlines will be May 15 (Earlybird), July 15 (Regular), September 15 (Late), and October 3 (Extended).
The festival runs in November (actual date TBD) on the UAT campus in Tempe, Arizona, as well as streaming online.Submit today! We've switched from Withoutabox to the new film festival submission site Film Freeway!https://filmfreeway.com/festival/UATDigitalVideoFestival
Posted by Paul DeNigris at 7:48 AM No comments:

Here's a playlist of one of the events we covered this semester, TEDx Evans Churchill, held in November at Phoenix's BioScience High School!

Posted by Paul DeNigris at 10:00 AM No comments: 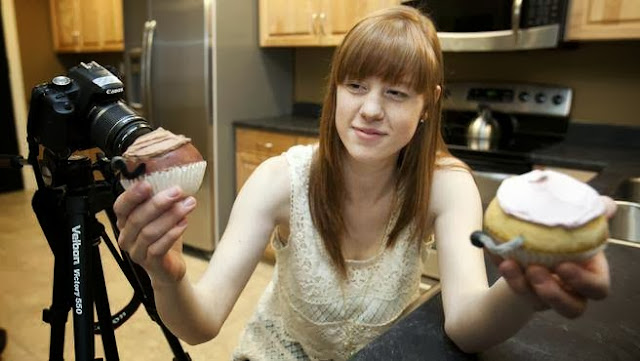 
"Filmmaker Christoffel received the Lieutenant Governor’s Award for Artistic Achievement, the trust’s highest honour for a student in any discipline. This is the first time it has been awarded to a person studying film."

Read all the details here: http://thechronicleherald.ca/artslife/1174597-lifetime-pals-score-talent-trust-awards

Posted by Paul DeNigris at 2:26 PM No comments:

Go behind the scenes with the UAT DV crew for "The Buddy System," a zombie film inspired by "The Walking Dead."

Posted by Paul DeNigris at 7:55 PM No comments: