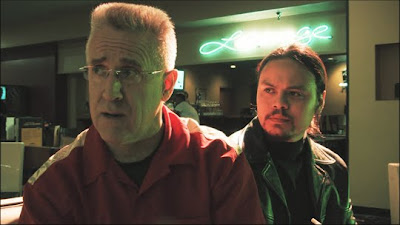 "A Turkey," a short film produced by the DVA442 HDV Production Class during the January 2009 semester, has been named an Official Selection of the 2010 Phoenix Film Festival! The film was produced by Nick Wassenberg and Susanna Morgan, photographed by Zac Donner, and edited by Joel Terry. Ryan Loveland handled costume design and Justin Gagen headed up the art department. The film stars Kane Black, Louie Palmieri, and Steve Briscoe, and was directed by Professor Paul DeNigris.

It’s that time of year again, for the Tenth Year! The tenth anniversary of the Phoenix Film Festival is looking for fellow movie-lovers to volunteer for the upcoming festival! PFF 2010 will be held April 8 - April 15, 2010 at the Harkins Scottsdale/101 and will feature the finest in independent film from around the world, celebrities, seminars, and parties all week long! This will be the greatest film party in town. In exchange for a commitment of a least 24 hours, volunteers will receive a festival t-shirt and a full festival pass ($150 value, excludes the opening night screening).

We are looking for enthusiastic people in the following areas: Ticketing; Theatre operations; Volunteer check-in; Expo booths; Educational outreach; Filmmaker liaison; Events & Merchandising. Volunteers with technical experience are also encouraged to apply. There are also many opportunities for people to commit their volunteer hours prior to the festival. There will be promotional events, screenings, and street teams to market the festival. We’ll also need people to help with moving, set-up and clean up, as well as volunteers to help with admin work in the Phoenix Film Foundation office.

We've scheduled 3 New-Volunteer Orientations to go over the specifics and answer any questions you may have. This is also an opportunity to sign up for the shifts you'd like to work. Orientations last approximately an hour and will take place at the Phoenix Film Foundation offices at 1700 North 7th Avenue in the Metro Arts Institute building (top floor). (NW corner just north of the Circle K at McDowell.)

If you want to be a part of Arizona’s Premier Arts event, please email volunteer@phxfilm.com to reserve a spot at one of the scheduled orientations.

See you at the festival!

Posted by Paul DeNigris at 8:24 AM No comments:

Here's a great internship recently posted by one of our DV alumni, Dustin Hampton:

Posted by Paul DeNigris at 7:52 AM No comments: