Posted by Paul DeNigris at 9:50 AM No comments: 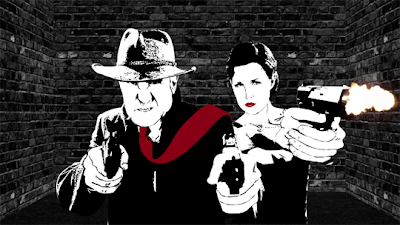 On Friday July 23rd at the Phoenix Art Museum, IFP/Phoenix will be hosting two screenings of films entered into this summer’s “Beat the Clock” 48 Hour Film Challenge - including an entry produced by the UAT Digital Video Program titled “Extraordinary Colleagues.” Written by Paul DeNigris and Steve Briscoe, the 3-minute film took the required prop - a paintbrush - as a jumping off point to tell the romantic comedy story of a comic book writer and her editor, while also telling a parallel action tale within the Sin City-esque world of the comic book they produce together.

The film will screen twice, once during the 6pm show and again during the 8pm show. The “Beat the Clock” Awards will follow at 10pm. More details can be found on IFP/Phoenix’s website. Tickets for the screenings are $15 each.

Open work schedule. Required to be on set for FX shot composition on weekends of August, September, and October.

How To Apply
Send a resume, cover letter, and portfolio to Chantal Legendre

Gold Medal Swim School Video Intern. We are interested in an intern with excellent videography skills as well as people and communication skills. The project is unique in the environment and scope. We would like to create a DVD version of our Instructor Manual at the swim school. The project would take 3-6 months depending on the interest a candidate would have in several other small projects.

Duties Include
Skills Required
Desired Education
How To Apply

Send a resume and cover letter to Elaine Anawalt

New DV Jobs from Around the Web


Visual Effects Artist/Editor
web-based production company - Manhattan, NY
See original job posting at Mandy.com »
We are looking for a hard-working, self-starter to join our web-based post production team. This individual must be a detail-oriented visual effects artist who can think quickly in a fast-paced environment. In addition to being the VFX guru on the team, we are also looking for someone who has solid editing experience. You will be working very closely with the other members of the post production team, as well as with directors and producers, so you must be a team player with an easy-going ...


Video Production Specialist
American College of Cardiology - Washington, DC
See original job posting at washingtonpost.com »
FUNCTION AND SCOPE:
Work as coordinator for busy in-house video production department. Assist in the day-to-day trafficking of video projects from concept to completion...MAJOR DUTIES AND RESPONSIBILITIES...Assist in all aspects of video production as a crew member for in-studio and on location captures;...Assist in post-production as a team member, assistant editor, or editor on assigned projects;...Organize and maintain digital assets via video production storage system;...Be responsible for ...
Posted by Paul DeNigris at 9:08 AM No comments:

Email ThisBlogThis!Share to TwitterShare to FacebookShare to Pinterest
Labels: jobs

Filmmakers Ridley Scott (Gladiator, Blade Runner) and Kevin Macdonald (The Last King of Scotland) are launching an experiment in "user-generated filmmaking" - a joint venture with YouTube called "Life in a Day."

To participate in “Life in a Day,” people must film a snippet of their daily routine - 10 minutes max - on July 24. Video uploaded onto a special YouTube channel (www.youtube.com/lifeinaday) will be scrutinized by a team of editors. Macdonald, serving as director, and Scott, in a producer role, will bring selected clips together into a feature-length documentary of a single day on planet Earth.

Individuals whose video makes it into the finished film will be credited as co-directors. The top 20 contributors will be flown to the 2011 Sundance Film Festival, where the film will premiere out of competition.

More on this story can  be found in the New York Times' "Media Decoder" section.
Posted by Paul DeNigris at 9:23 AM No comments: